← Rangers comeback to win Game 4 in overtime; Hayes’ first playoff goal is a winner
Rangers move on to Round 2 with thrilling overtime win at MSG →

Rangers aim to close out Round 1 at MSG; No lineup changes for the Rangers 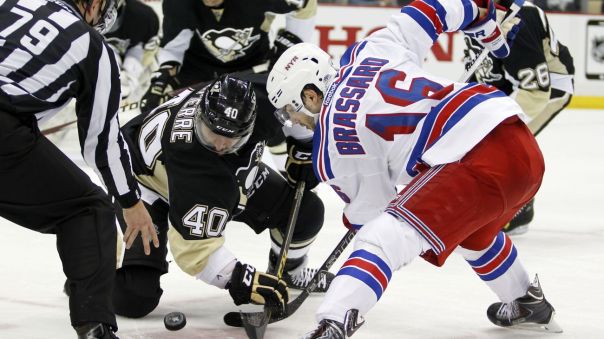 The Rangers are back at MSG for Game 5, looking to close out the series in five games for the first time since 2008. Photo courtesy of Getty Images.

For the first time since 2008, the Rangers will attempt to end their first round series against the Pittsburgh Penguins in five games on Madison Square Garden ice, searching for their third consecutive playoff win.

The Rangers have not won a series in less than six games since the 2007-08 season, when they defeated the New Jersey Devils in five games, a series famous for the creation of the “Sean Avery rule,” when he screened Devil’s goaltender Martin Brodeur by waving his hands and stick in his face.

After sweeping the two games in Pittsburgh before returning home, New York has their best chance in years to close out a series early. And like an article from Fulltilt NYR pointed out, we could be seeing a very different kind of game tonight.

From Game 1, this has been a very defensive minded, tight checking style of play, with the Rangers scoring just nine goals (2.25 GPG) in the four games, and the Penguins with only seven goals (1.75 GPG). Mike Johnston and the Penguins realized that without a lot of their key defenders, and what seems to be an injured Evgeni Malkin, their focus had to shift to eliminating the Rangers’ speedy style of play.

That has led to three 2-1 Rangers’ wins, and a 4-3 victory for Pittsburgh back in Game 2. It’s logical to think that being down 3-1 games in the series, the Penguins will try to open things up a bit and get their offense going. They’re averaging just 23.5 shots per game, also a testament to the Rangers’ defensive play thus far, and I fully expect that to increase for tonight.

With that being said, Henrik Lundqvist will need to be on his A-game again tonight. He’s been very good in this series, with a 1.74 GAA and a .926 save percentage, and is coming off of one of his better performances in Game 4, where he was fantastic in the third period to help send the game to overtime.

Henrik Lundqvist is in net for New York, aiming to secure the win in Game 5 and continue his solid play in this series. Photo courtesy of MSG Photos.

Pittsburgh will likely be pressuring heavily with guys like Sidney Crosby, Chris Kunitz, Brandon Sutter and Evgeni Malkin. Crosby and Kunitz are tied for the team lead in points with three, and Sutter has been very effective in the first four games. Malkin has really struggled in this series, and he is hoping to start getting his offensive production going.

With the Penguins more focused on trying to score goals to support Marc-Andre Fleury, who has been very good in this series, the Rangers will have plenty of opportunities to use counter with their speed game. If the ice opens up, look for Derick Brassard and Rick Nash to create some two on one opportunities and generate scoring chances.

Kevin Hayes scored the overtime winner for New York in Game 4, his first career playoff goal coming at a crucial time. He wasn’t playing like himself in the first three games, adjusting to the faster pace of thje playoffs. But that goal could provide some confidence for him on what was a dynamic third line to close out the season. With an elite passer and playoff veteran in Martin St. Louis on his wing, this duo has limitless possibilities. 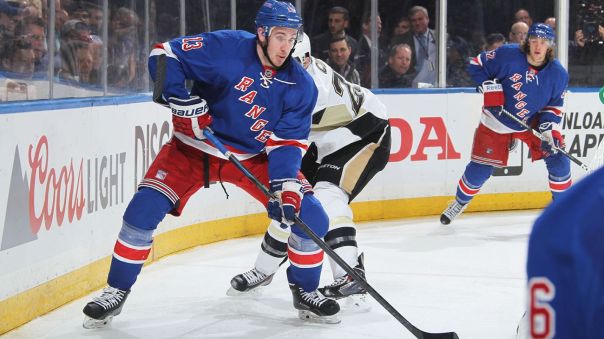 Kevin Hayes and Martin St. Louis look to build off their success in Game 4 as they return to MSG for Game 5. Photo courtesy of MSG Photos.

The Rangers defense will have to continue their solid play in this series as the Penguins will up the tempo of their offense. With Lundqvist, they’ve allowed just 23.5 shots on goal, allowing just seven goals in the four games, a huge reason why they’re up 3-1 in the series. But New York defensemen have also tallied 10 points in the series, led by Ryan McDonagh and Dan Girardi. McDonagh leads the NHL in assists (15) and points (20) in the playoffs since Game 4 against the Penguins’ last year.

The Rangers will be going with the same lineup tonight, meaning that Kevin Klein is still out of the lineup. Vigneault said there is no set back, the bone in his arm is just taking longer to heal. Keith Yandle and Mats Zuccarello both missed practice yesterday, but they will play tonight.

The Rangers and the Penguins will face off at Madison Square Garden at 7 PM. The game will be broadcasted on MSG Network.

I will be at the game wearing my Derick Brassard Heritage jersey, and will be sitting in Section 206, Row 4, and Seat 9. If you’re at the game, feel free to come and say hi!

← Rangers comeback to win Game 4 in overtime; Hayes’ first playoff goal is a winner
Rangers move on to Round 2 with thrilling overtime win at MSG →