← Rangers look to put stranglehold on Penguins in Game 4
Rangers aim to close out Round 1 at MSG; No lineup changes for the Rangers → 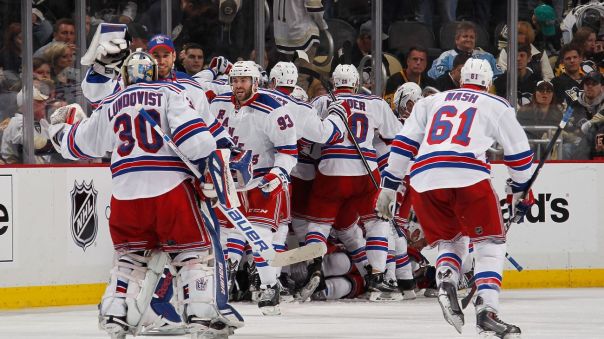 The Rangers were ecstatic when Kevin Hayes scored the overtime winner, giving the Rangers a commanding 3-1 lead over the Penguins. Photo courtesy of Getty Images.

Kevin Hayes’ first career playoff goal could not have come at a better time, lifting the Rangers to a 2-1 overtime victory over the Pittsburgh Penguins at the CONSOL Energy Arena, and sending the Blueshirts back to Madison Square Garden with a commanding 3-1 series lead.

Although the Rangers had dominated first periods in this series, Penguins head coach Mike Johnston vowed that his team would come out with more fire, and play a better first 20 minutes. Pittsburgh did exactly that, completely outplaying the Rangers in every facet of the game, and limiting them to just two shots on goal in the period.

After the game, several Rangers including Lundqvist, Staal, Kreider, and others all said that Alain Vigneault really laid into the guys, firing them up and jumpstarting their performance in the second half. And around the 12 minute mark, Vigneault’s squad began to start playing their game again, leading to a Brassard goal in the second period and Hayes’ overtime winner.

Henrik Lundqvist had another extremely strong game for the Rangers, allowing only one goal for the third time in this series. Henrik was one of the reasons that the Penguins were only up 1-0 after the first period, and he continued to make some big saves late in the game. In this series, Lundqvist is 3-1 with a 1.74 GAA and a .926 save percentage. 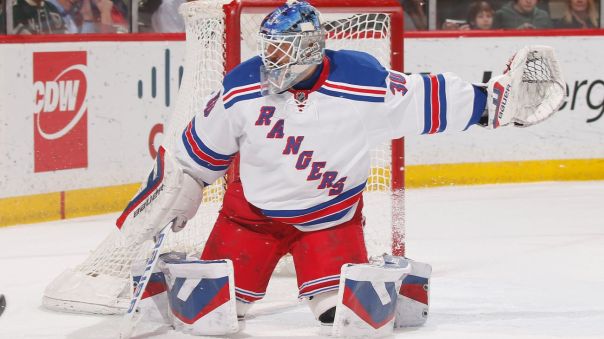 Henrik Lunqvist was a superstar for the Rangers yet again, making 22 saves and allowing just one goal for the third game in this series. Photo courtesy of Getty Images.

New York’s defensive effort was very solid yet again, with Dan Girardi having another fantastic game. Girardi has been the best defenseman in this series, giving up the body to make some key plays in this game. Girardi cleared the crease of a loose puck in the final seconds of the third period, and had a shot block in overtime to prevent a high quality scoring chance. Simply put, Girardi was awesome.

There isn’t much to say about the first period. Derick Brassard said it best. “It was brutal.”

The Penguins completely shut down New York. The Rangers were not able to use their speed game, had trouble connecting on passes and making any plays. The Penguins came out aggressive and desperate like Johnston said, scoring the first goal of the game just 2:22 in. Patric Hornqvist deflected a shot from Ben Lovejoy past Lundqvist, who was screened by what seemed like six or seven different people.

New York managed to get just two shots on net, despite having two power play opportunities. Thankfully, the Rangers were able to escape with just a 1-0 deficit thanks in part to Lundqvist’s play and a strong defensive effort to close out the period.

All of the pressure eventually led to a goal, and it was Mr. Clutch Performer, Derick Brassard coming through again with a timely goal.

Mats Zuccarello started the play with a great stretch pass to Ryan McDonagh joining the rush. McDonagh took it around the boards, dropping it off for Rick Nash. Nash fired a bad angle shot at Fleury, bouncing off some skates to Brassard near the post. Brassard kept whacking at the puck, eventually finding a way to stuff it past Fleury to tie the game at one with just 2:45 remaining in the period. 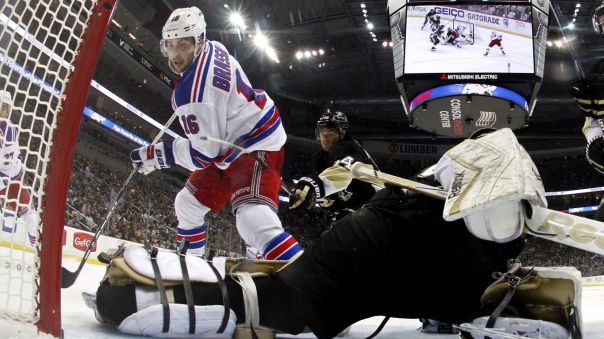 Derick Brassard’s perseverance led to a stuff in goal late in the third period, tying the game at one. Photo courtesy of Getty Images.

The third period was a bit more even, with neither team giving the other much space to work with on the ice. The Rangers did have the better chances, but both goalies had some high quality saves. The Penguins nearly scored when Henrik Lundqvist came out of the crease to make a save. Dan Girardi swept a bouncing puck out of the crease, and the game went to overtime.

New York had the only three shots on goal in overtime. On an offensive zone faceoff, Kevin Hayes won a faceoff back to Keith Yandle, who dumped it deep into the zone. After some cycling, St. Louis tried a wraparound, causing a scramble in the crease. Hagelin chipped at the puck, but couldn’t put it in the open net. The loose puck worked its way over to Kevin Hayes, and he snuck it underneath the glove hand of Fleury to give the Rangers a huge win. 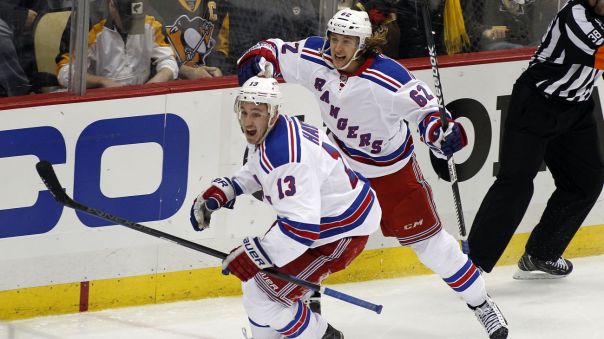 With a 3-1 series stranglehold on Pittsburgh, and the teams heading back to MSG, the Rangers know that they need to do everything in their power to end this series in five games.

Kevin Hayes was struggling a bit at the start of the playoffs, appearing to be a bit tentative and nervous. He looked better around the halfway point of this game, eventually scoring the game winner. Hopefully this goal helps instill some confidence in him going forward.

The defensive effort in this game was outstanding, especially against Sidney Crosby and Evgeni Malkin. Sidney Crosby’s line had no points, two shots on goal, no other attempts, no hits, no blocks, no takeaways and one giveaway. Malkin’s line had no points, one shot on goal, one missed shot, no hits, no blocks, one giveaway and one takeaway. Those stats are astounding, and really shows how well the Rangers played on defense.

The Rangers and Penguins will meet for Game 5 at Madison Square Garden with New York looking to close the series.

← Rangers look to put stranglehold on Penguins in Game 4
Rangers aim to close out Round 1 at MSG; No lineup changes for the Rangers →