They did it again.

With their season on the line, the Rangers performed very well down in Tampa Bay, staving off elimination with a 7-3 Game Six victory, setting the scene for a winner take all Game 7 at Madison Square Garden on Friday.

The Rangers are now 15-3 in their last 18 games when facing elimination since the start of the 2012 playoffs, including four wins in these playoffs. The resiliency and character that this team has is truly astounding, and they continue to get it done when their backs are against the wall.

There has been one specific player that has been a big part of those elimination game wins, and that man is Henrik Lundqvist, who was very strong again tonight.

Lundqvist has started all 18 of the Rangers’ elimination games since the start of the 2012 playoffs. In those 18 games, Henrik has the same 15-3 record, posting a 1.47 GAA and a .954 save percentage, which are truly amazing numbers. He stood on his head in the first two periods, keeping the Rangers in the game when they were being severely outshot. Lundqvist made some truly fantastic saves, and was the reason that the Rangers were able to extend their lead in the third period.

Henrik Lundqvist was very strong when his team needed him the most, improving his record and stats in elimination games. Lundqvist was at his best in the first two periods while his team was getting outshot early on. Photo courtesy of Rebecca Taylor/MSG Photos.

The Rangers also had a huge night from their top line of Rick Nash, Derick Brassard and JT Miller, a line that combined for 13 points. Nash and Miller both had a goal and three assists, and Derick Brassard had a hat trick with two assists. It was actually the first time in franchise history that three Rangers recorded 4 or more points in a playoff game. The top line did more than step up in a huge game, and helped give the Rangers a chance in Game 7.

Rick Nash “was a beast,” according to Derick Brassard, and he really was. Once again, Nash was a force with and without the puck, using his size to his advantage all night. That was most evident on his assist on JT Miller’s goal, using his frame on the forecheck to steal the puck away and get it to Derick Brassard for a chance. Nash now has 7 points (3-4-7) in this series, and 14 points (5-9-14) in the playoffs.

JT Miller was bumped up to the top line in Game 5, and has been very effective as top line player when asked. Alain Vigneault explained that he wanted to utilize his size and skill in that position, which has worked. Miller scored his first career playoff goal and added three assists, giving him 8 points (1-7-8) in the playoffs. Even in Game 5, when nobody scored, Miller had a lot of good chances, and was the best forward on the ice. He’s thrived in whatever situation Vigneault asked of him, and the increased trust in his game has helped motivate him.

JT Miller and Rick Nash were both huge pieces on the Rangers’ top line in Game 6, each scoring one goal and adding three assists. The trio of Nash, Miller and Brassard combined for 13 points (5-8-13). Photo courtesy of Rebecca Taylor/MSG Photos.

Although Brassard said that Nash was a beast, Brassard was the best forward on the ice. Mike Millbury was right when he said that Brass had done a lot of “hacking and slashing” in this series, agitated by the Lightning’s forwards. Tonight was Brassard getting it done with his game, and he led the way tonight, starting with the goal on the Rangers first shot of the game.

Derick Brassard scored the first Rangers hat trick in a Game 6 when the team was trailing the series 3-2 since Mark Messier’s famous guaranteed win in Game 6 of the 1994 Eastern Conference Finals.

Brassard’s five point night put him in first place on the team in scoring with 16 points (7-9-16). He’s the third player in franchise history to post five points in a playoff game, and the first since 1983. He’s the first Rangers to score six playoff goals on the road in one year since Mark Messier and Alexei Kovalev did it in 1994. And he’s one of two Rangers to record 10 or more points in three consecutive playoff years. The only other Ranger to do that is Mark Messier.

Keith Yandle had another really solid games, with the second goal of the game and an assist on Rick Nash’s goal. Yandle thrives in the up-tempo, speedy, offensive type of game. Tonight he was also good defensively and in one-on-one situations, with yet another strong game in this series. Yandle has seven points (2-5-7) against the Lightning. 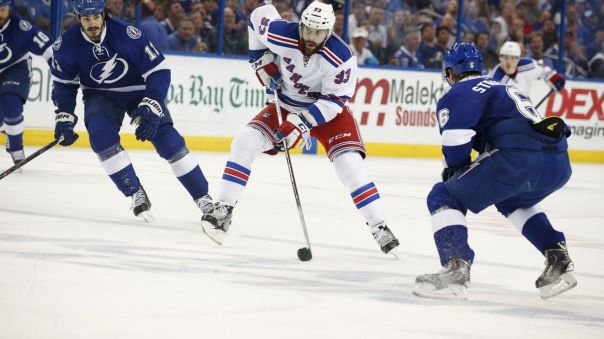 Keith Yandle had yet another strong game against the Lightning, scoring a big second goal and assisting on an insurance goal in the third period. He has seven points (2-5-7) in this series. Photo courtesy of Rebecca Taylor/MSG Photos.

The Rangers were very physical in their Game 4 win, a strategy that disrupted the Lightning’s style of play and agitated them. That was clearly the gameplan for Game 6 as well, as the Rangers came out hitting, playing an aggressive game and bringing an edge to their play.

New York got the quick start that they were looking for, scoring on their first shot of the game just 3:36 into the opening period. Off of a faceoff win, Rick Nash tied up his man to allow Dan Boyle to quickly turn and fire a puck on net, keeping the puck in the zone. The puck never got to Bishop, and JT Miller collected it instead, making a great pass to Brassard despite being heavily defended. Brass brought the puck from his forehand to his backhand, got Bishop to open up, and slid the puck five-hole for the first goal of the game.

The Rangers were playing their style of hockey in the first 15 minutes, controlling the pace of play even though they weren’t getting a ton of shots on goal. They were clearing the crease so Lundqvist could see the puck, and were sound defensively.

The Rangers took a penalty for holding, and the Lightning had perhaps their best chance of the period. Ryan Callahan slid a puck over to Steven Stamkos in tight, who tried to one time it into the open net, but Lundqvist made a spectacular play to stretch out his left pad and deny him on the doorstep.

Just 1:16 later, after killing off the power play, the Rangers rewarded their goaltender with a goal of their own. On the rush, Derick Brassard dropped a puck back to Rick Nash, who had his shot stopped. Brass collected the puck and showed poise, waiting for Keith Yandle to get into position before passing it to him at the point. Yandle waited for a shooting lane to open up, and then fired a wrist shot on goal. It deflected off of a Lightning defender and past Bishop, giving Yandle his second goal of the postseason.

Tampa Bay would get a goal back on a power play that they shouldn’t have had. The referees missed a hit from behind call on Steven Stamkos driving McDonagh into the boards. That caused Kreider to retaliate and take a crosschecking penalty. Stamkos and Derek Stepan were also sent to the box, but the Lightning had a power play.

On the man advantage, Anton Stralman sent a pass through all three zones to Ryan Callahan, who had snuck in behind the Rangers’ defense and was waiting on the blue line. He had a breakaway, and went to the backhand before putting it away, top shelf, past Henrik Lundqvist, cutting New York’s lead to just one.

The second period was a solid defensive effort from the Rangers, although they were severely outshot early on in the period. Henrik Lundqvist made a multitude of saves in this period, with his best being a diving save to deny Tyler Johnson on a second chance opportunity. That kept the score at 2-1 going into the final period.

The Rangers came out blazing in the third period, aiming to extend their lead and support Henrik Lundqvist’s strong performance through two periods. They were able to do that just over three minutes into the period.

On a hectic play, Ben Bishop stopped the first shot from Rick Nash. JT Miller was aware of the rebound, and slid it to Brassard, but Bishop made a fantastic save while twisting and falling. But Alex Killorn lost his stick, leaving the passing lane open. Brassard passed the puck to Miller from behind the net, and he was able to outmuscle Steven Stamkos and put the puck past the unaware Ben Bishop for his first career NHL Playoff goal, and give the Rangers a 3-1 lead.

Just 2:58 later, with the Rangers still pressing, they broke through again, and it was James Sheppard scoring his first goal of the playoffs. On a puck battle along the boards, the Rangers prevailed, and the puck came to Dominic Moore in front of the net. He blasted a slap shot, and Bishop couldn’t control the rebound, Tanner Glass tried to stuff it past Bishop, but it was ultimately Sheppard driving to the net, getting a shot and having the puck deflect off of his shin and into the net. New York had a 4-1 lead. 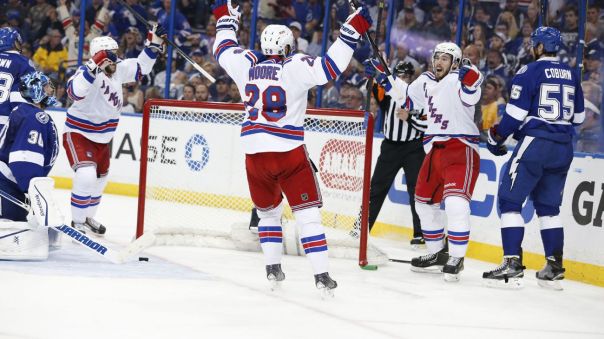 The fourth line’s hard work paid off, winning a board battle, getting a few shots on goal and finishing the chance, which was James Sheppard’s first goal of the 2015 playoffs. It also turned out to be the game winning goal. Photo courtesy of Rebecca Taylor/MSG Photos.

But they weren’t done there. The Lightning looked like they were going gather the puck in their own zone, but Rick Nash made a great effort to beat Sustr to the puck, outmuscle him and pass the puck back to JT Miller. Miller made a slap pass, which Bishop thought would be a shot, and he hit Brassard wide open at the side of the net. His wrister found twine for his second goal of the game.

After this, Ben Bishop was pulled in favor of the rookie Andrei Vasilevskiy. Bishop had allowed five goals on 26 shots.

Just 36 seconds later, Tampa Bay got one goal back. Off of the faceoff, Nikita Kucherov fired a wrist shot at Lundqvist. He was deep in the net, and the shot sailed over his glove. It’s a puck that has to be saved under normal circumstances. The Lightning cut the lead to 5-2.

But the Rangers answered back, scoring a goal to extend their lead back to four goals. On the power play, Miller dropped the pass back to Keith Yandle at the point, who used his vision to find the perfect shooting lane, and he fired a wrister on net that surprised Vasilevskiy. Nash was able to get to the rebound, and stuff it past the rookie for his fourth point of the game.

The Lightning also scored another goal, and it was Nikita Kucherov scoring on an odd man rush. The Lightning would pull their goalie with over five minutes remaining in the final period. They put a lot of pressure on, but Lundqvist was strong.

Derick Brassard was able to secure his hat trick with an empty net goal, concluding his epic five point night, and sending the Rangers back to New York for an immensely important Game 7. 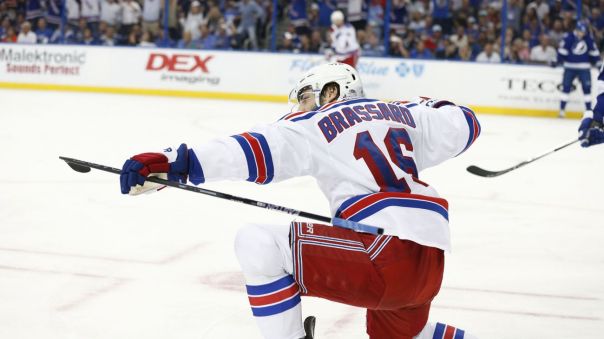 Derick Brassard finished off his masterful performance in Game 6 with an empty netter, giving him the hat trick to help force a Game 7 on home ice. Photo courtesy of Rebecca Taylor/MSG Photos.

Jon Cooper said that his team wasn’t afraid of a potential Game 7, but said that “everybody in our locker room would love to not have to get on a plane again.” That’s exactly what the Rangers will make them do,forcing a winner-take-all Game 7 Friday night at Madison Square Garden.