← Historic matchup as Rangers travel to Brooklyn to take on the Islanders; Glass in lineup
Rangers look to continue strong play and rebound against Colorado → 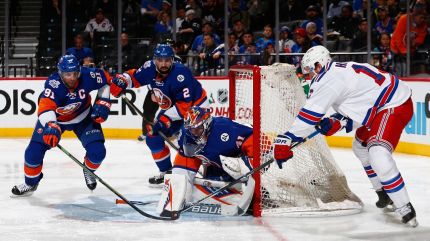 In the first ever rivalry matchup between the Rangers (17-6-3) and the Islanders (14-8-4), it was the home team from Brooklyn coming away with the victory, winning 2-1 in a shootout.

The game lived up to the hype, jam packed with excitement, action, scoring chances, great goaltending and aggressive, but clean, play from both teams.

Jaroslav Halak continued his history of strong performances against the Rangers, making a total of 33 saves, including three in the shootout, to pick up his seventh win of the season.

Henrik Lundqvist was absolutely phenomenal, turning aside 36 of the 37 shots that he faced, with the only Islanders goal coming on a two man advantage. He continues to give the Rangers a chance everytime he’s in the crease, and he did so again tonight.

Dylan McIlrath got his first start since the Kevin Klein injury, and he performed very well, giving the team confidence that he can be trusted going forward. He kept things simple, play physically and smart, and made no mistakes. The rookie logged 15:21 of ice time with two shots on goal, two blocked shots and three hits. 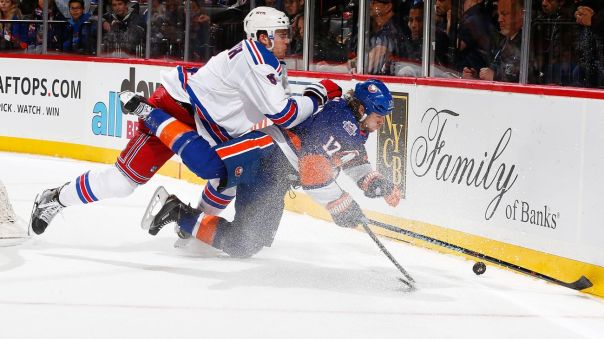 Tanner Glass made the trip from Hartford to take the spot of the ill Emerson Etem, and he actually played quite well. He skated with Oscar Lindberg and JT Miller, arguably the best line in this game. They created a lot of chances and nearly scored a few times. Glass did enough to warrant a spot in tomorrow’s lineup.

Keith Yandle deserved something tonight. He didn’t get a goal or assist, but he was outstanding. Yandle singlehandedly created a ton of scoring opportunities, peppered Halak with shots and commanded the power play whenever AV let him on. Excellent performance from No. 93.

The atmosphere from the puck drop was electric. “Let’s go Rangers” chants clashed with “Let’s go Islanders” cheers from the home fans, but ultimately some loud “Zuuuccc” calls won out. There was a lot of energy from the players and the crowds, with practically no stoppages and free flowing hockey.

The first 20 minutes was the best period of hockey that the Rangers have played in a long, long time. They outshot the Islanders 13-6, limiting the Isles to just 3 even strength shots on goal. Jarret Stoll was all over John Tavares, limiting him from doing much of anything. The fourth line played a really good defensive, forechecking period.

But amazingly, it was the third line putting on a show and creating some phenomenal chances. The third line with Tanner Glass on it. The same Tanner Glass that was easily the best forward on the ice in the first period.

Glass brought a ton of energy and physicality in the first period, playing strong on the boards, getting to the front of the net and even adding some offense. He was second with two shots on goal in that period, and just missed the net wide from the right circle on a set-up from Miller. The line of Lindberg, Miller and Glass all finished positive in corsi, posting a +10, +8 and +8 corsi for, respectively.

Dylan McIlrath and Keith Yandle both had a very strong period, and the rookie actually led all skaters in corsi for with a +10 in the first 20 minutes. The duo combined for five shots on goal and played the most time at even strength.

There was one power play opportunity for the Rangers, and although they didn’t score, they did record three shots on goal. The game was tied at the first intermission, but the Rangers could feel good about their performance.

The Rangers gained a bit of momentum after eight minutes or so, getting a power play opportunity. But the Islanders were aggressive and only allowed one shot on goal. Thing’s took a turn for the worse when the Rangers started taking penalties.

Keith Yandle was whistled for hooking at 10:58, giving the Isles their first power play. The Rangers were well on their way to killing it off when Dan Girardi was whistled for a delay of game. The Islanders had a 53 second 5-on-3 man advantage.

But it would just take them 17 seconds to find the back of the net and open the scoring, and it was the captain John Tavares scoring his 12th goal of the season. Tavares got the puck and carried it through the middle of the ice, and shot it through the bodies in front of Lundqvist, giving the Islanders the lead.

Marc Staal was actually hooked by Anders lee in front of the net, and was prevented from moving to block the shot or make a defensive play. There was no call.

The Rangers began to slowly build their attack again, starting with the third line. JT Miller and Keith Yandle were putting on a passing clinic, and both Oscar Lindberg and Tanner Glass had some good chances.

But it was the hardworking fourth line that broke through for the Rangers, and Viktor Stalberg scored his third goal of the season with just 1:23 remaining in the period.

It was actually a really great play. Dominic Moore sent the puck up along the boards to a waiting Kevin Hayes. However, Hayes faked a slap shot, getting the defender to go down to the ice, and it bought some extra time for Marc Staal. His slap shot was deflected by John Tavares, and Stalberg found the loose puck quickly enough to slip it between Halak’s pads. That goal tied the game at one, and set up an exciting finale in the third period.

The third period was garbage. After recording 22 shots on goal in the first two periods, they barely reached six in the last 20 minutes, with two of them coming very late. Lundqvist was very strong in this period, making 12 save, including back to back stops on Strome and Tavares.

In overtime, the Rangers were presented with a huge opportunity when the Islanders took a penalty for too many men on the ice. They created some chances, but ultimately could not find the back of the net. Despite his great game, Yandle wasn’t on the ice for the first 1:30 of the power play.

Lundqvist made a big stop with the mask on Nielsen at the end of regulation, and the game headed to a shootout.

Kyle Okposo scored on the first attempt, going over the glove of Henrik Lundqvist. Rick Nash followed and was stopped by the left pad of Halak. Henrik took away the angle and closed the pads on Nielsen. Mats Zuccarello was second for the Rangers, and could not beat Halak through the pads. Lundqvist stayed with John Tavares through all of his moves and gave Dan Boyle a chance to tie the shootout.

Boyle came in very slowly, and he had Halak beat from the get-go, as the Isles netminder had no idea what to do. Boyle deked out Halak, transitioned to his backhand, but the puck rolled off the edge of his stick and went wide, giving the Islanders the win.

Overall, it was a much, much better game from the Rangers, but Halak was strong. The first two periods were encouraging, but the third period was a bit of a letdown. Overall, the Rangers should be very happy with their performance, and they should keep playing this way going forward.

The Rangers will head back to Madison Square Garden for tomorrow’s matchup against the Colorado Avalanche.

← Historic matchup as Rangers travel to Brooklyn to take on the Islanders; Glass in lineup
Rangers look to continue strong play and rebound against Colorado →