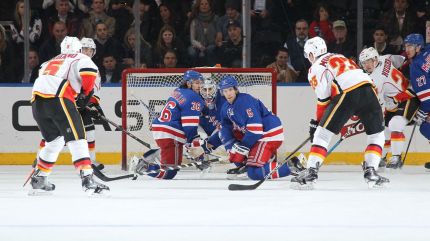 The Western Canada roadtrip has not been kind to the Rangers (18-9-3), falling to the Oilers in heartbreaking fashion, squandering multiple ties and comebacks as the defense collapsed. Now they’ll take on the Calgary Flames (12-4-2), winners of four straight games and eight straight at home.

This is the second and final matchup between these two teams, and New York is looking for their second series sweep in as many years. The Rangers won at MSG on October 25th by a final score of 4-1. Dan Girardi scored the go-ahead goal and Antti Raanta made 22 saves in the win.

Jiri Hudler scored the lone goal for the Flames in that game, but the 31 year old veteran may not even suit up. Calgary currently has the flu-bug running through the locker room, forcing Hudler and goaltender Karri Ramo to sit out Thurdsay’s game against the Sabres.

Johnny Gaudreau and Sean Monahan are perfectly healthy and producing points, combining for three of the four goals against the Sabres. Gaudreau has carried over his success from his stellar rookie season, leading the team with 10 goals and 28 points in 28 games. He has seven points (5-2-7) in the last four games.

Sean Monahan is in his third NHL season, so it’s hard to realize that he just turned 21 in October. Last season, Monahan had a big year, like many of his teammates did on the surprisingly strong Flames team last season. He had 31 goals and 31 assists last year, and currently has 10 goals and 22 points this season, including seven points (3-4-7) in his last four games.

Calgary has allowed 99 goals this season, the most in the NHL. Before the year started, they were expected to be a stout defensive team, with Mark Giordano, Dennis Wideman, TJ Brodie and Dougie Hamilton manning the blue line. That has not been the case.

The Rangers were also expected to be an excellent defensive team this year, and that has certainly has not been the case. In fact, their defense has probably been the worst part of the team. During the first 20+ games of the season, it was Henrik Lundqvist and Antti Raanta that kept the Rangers in games.

Henrik Lundqvist struggled at times last night, but he was let down by his defense and their blown coverages. Lundqvist allowed five goals on 33 shots before being replaced by Antti Raanta, who took the loss after surrendering the Oilers’ sixth goal on a breakaway due to, you guessed it, a defensive breakdown.

There is no confirmation on who will start, but my guess would be Raanta. Raanta is 3-0-0 in four appearances against the Flames. In his last two starts against Calgary, he’s won both games with a 1.00 GAA and a .957 save percentage.

Derick Brassard scored twice last night, putting his goal total at 11 for this season and giving him a total of 22 points. Brass has seven points (5-2-7) in the last six games, and he’s been an integral part of keeping the Rangers afloat in the absence of Derek Stepan. 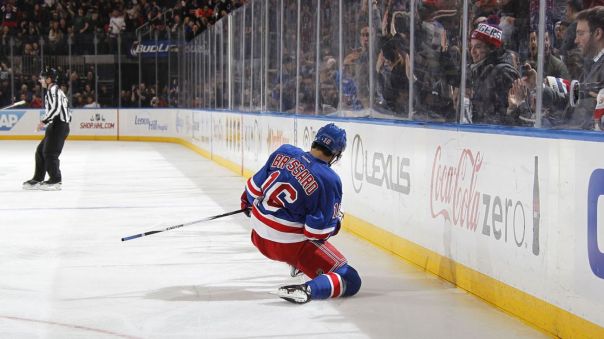 Mats Zuccarello broke out of his scoring slump, as did Rick Nash last night. Zuccs and a goal and an assist, while Rick Nash tied the game at five and collected two helpers. With Chris Kreider also scoring last night, almost all of the key players that needed to end slumps did. Now it’s time to continue scoring.

Dan Girardi and Ryan McDonagh both had about as bad of a game as humanly possible last night. They were the only two defenders to finish with a negative plus/minus rating, and they were on the ice together for the first five Edmonton goals. McDonagh made a crucial error on the sixth goal as well.

Plain and simple, they were awful. They blew coverages, played lazily, lagged behind the play and made stupid mistakes. If you want a breakdown of the goals and their performance, you can read last night’s recap HERE. As the top pair, they both need to be miles better. All eyes are on them tonight.

Viktor Stalberg sat last night, but he should get back into the lineup, and not at the expense of Emerson Etem. Tanner Glass or Jarret Stoll should sit. Glass has been a negative possession player for the last few games, and Stoll made a huge mistake on the Oilers’ go-ahead goal, and all of his numbers have dipped except for his faceoff percentage.

The Rangers and the Flames will face off at the Scotiabank Saddledome at 10 PM. The game will be broadcasted on MSG+.

No projected lineup because AV switched the lineup numerous times throughout the night.