The Rangers need this win. Badly.

After weeks of subpar play, poor decision making, defensive lapses and countless turnovers, the Rangers (19-11-4) find themselves trying to stay afloat while dealing with injuries and confidence issues. But they’ll face arguably their toughest team in a while when the Capitals (23-6-2) roll into town.

After an okay start to the season, Washington has been nearly unstoppable lately, winning 11 of their last 13 games following a 5-2 comeback win over Tampa Bay that saw the Caps erase a 3-0 deficit. They’ve jumped out to a commanding lead in the Metropolitan Division, sitting six points ahead of the Rangers with three games in hand.

On the contrary, the Rangers can’t seem to do much of anything right. A brief two game road trip amounted to no points, with back-to-back 5-2 losses to Minnesota and Winnipeg. They have just one win (1-4-1) in the last six games, and only three (3-8-2) in the last 13 games.

They’ve also been terrible defensively, allowing 22 goals in their last four losses (0-3-1). Henrik Lundqvist has seen his numbers regress to a normal level, currently holding a 2.30 GAA and a .928 save percentage. While he certainly hasn’t been playing at the superhuman level he was to start the season, it’s hard to place much blame on him at all when the entire team has been playing as bad as they have been in front of the net.

In his interview after the game, Lundqvist said that he needs to be “at his absolute best for us to win games right now.” That’s not a comment against himself, but instead Hank is saying that with the team in its current state, playing this badly, he needs to bail them out in order for the Rangers to win. Hank is never one to directly call out his team, but this is as close as it gets. He has to be frustrated with the defense in front of him, and there’s not much he can do about it.

This is the second of five games between the Rangers and the Caps this season, and the second of three games at MSG. New York won 5-2 at the Garden on November 3rd, with five different Rangers tallying goals. Derick Brassard, Kevin Klein, Kevin Hayes and Oscar Lindberg all recorded two points and Henrik made 32 saves.

While the Rangers have been really struggling recently, they’ve won their last two games on home ice, and they’re 13-4-1 at MSG. They’re winless on the road since November 21st, going 0-5-2 in the seven games away from the Garden since then. So it’s a good thing they’re home today. 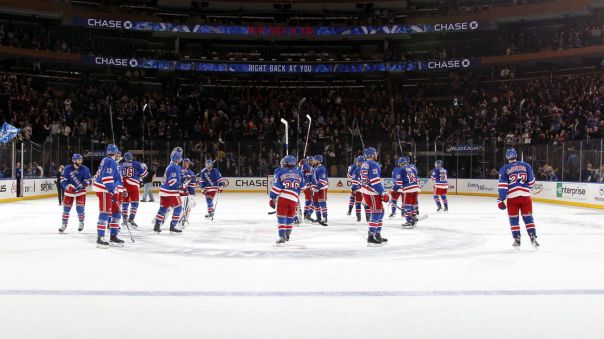 The one place that the Rangers have had consistent success this season is at MSG. Photo courtesy of MSG Photos.

The Capitals have offensive threats all over the ice, and it starts with Alex Ovechkin. Arguably the best pure scorer in the NHL, Ovechkin leads the teams in goals (16) and points (13). Don’t take penalties, because more often than not, he’ll make you pay with his trademark one-timer from the right faceoff circle.

Another Russian winger that’s having a fantastic season is second year player Evgeny Kuznetsov. He’s done an excellent job of providing depth to a team that was lacking in that department, scoring 28 points (9-19-28) in 31 games this season. Nicklas Backstrom (10-18-28) is still one of the best and most underrated centers in the NHL, and TJ Oshie (12-9-21) and Justin Williams (8-12-20) added even more scoring to the team.

Braden Holtby is elite. There’s no denying it anymore. He’s an elite goalie and probably the best in the NHL as of right now. Holtby has played 26 of the team’s 31 games, posting an incredible 20-4-1 record with a 1.92 GAA and a .931 save percentage.

Henrik Lundqvist, and Antti Raanta in part, are the reasons why the Rangers aren’t a sub-.500 team. Lundqvist allowed four goals in the loss to the Wild, but nobody will talk about the countless amount of great saves he made to prevent the Wild from scoring eight or nine goals. He’ll face a tough test tonight in search of his 16th win of the season.

Dan Boyle has been playing really well lately, thriving with consistent and increased minutes. Boyle has been excellent on the power play as well, scoring against the Jets on Friday. He now has 10 points (3-7-10) this season, and he’s been one of the more reliable defensemen as of late. 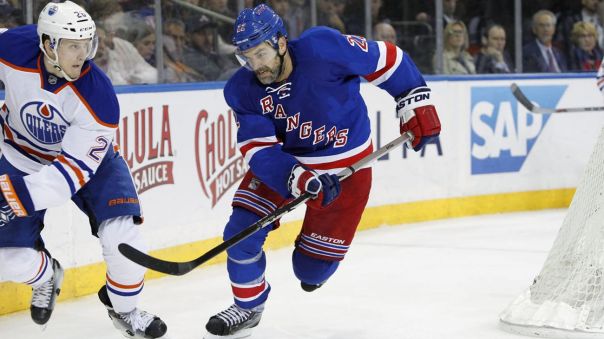 Dan Girardi deservedly shouldered a lot of the blame for the Rangers defensive struggles, but Ryan McDonagh deserves just as much criticism. He has seen his possession numbers rise while away from Girardi, but he is still making a lot of coverage mistakes and turnovers. With Klein still sidelined and McDonagh as the captain, he needs to pick his game up and set an example.

The top line of Nash, Brassard and Zuccarello have been scoring, but they haven’t been playing all that well. They’ve actually been one of the worst possession lines on the team, and they’ve been lazy in coverage at times, especially Brassard.

Zuccarello isn’t playing at his best, but to his credit, he’s always skating hard, going in on the forecheck and generating the most chances. He also clearly is frustrated, breaking his stick over a garbage can after Friday’s loss, and he wants things to change. I think he’ll have a good game tonight, taking matters into his own hands.

Oscar Lindberg is back into the lineup, but AV hasn’t said who it will be. My guess is Viktor Stalberg, since AV benched him for the entire third period in Winnipeg.

The Rangers and the Capitals will face off at Madison Square Garden at 7 PM. The game will be broadcasted on MSG Network.