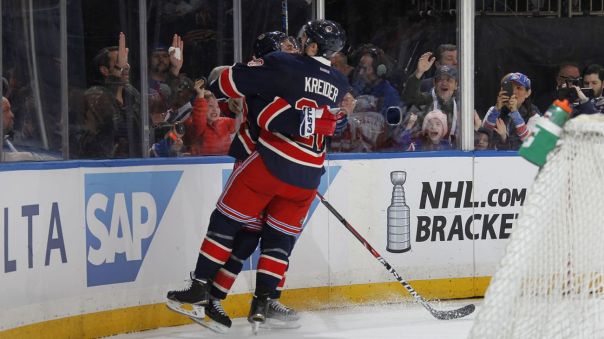 Dan Boyle celebrates after scoring his 10th goal of the season in the first period. Photo courtesy of MSG Photos.

Despite already having their ticket punched to the postseason, the Rangers (46-27-9) came out strong and won their last game of the regular season, escaping some late drama and taking down the Detroit Red Wings (41-30-11) by a final score of 3-2.

The Rangers could have knocked the Red Wings out of a playoff spot, but luckily for Detroit, the Boston Bruins were blown out by the Senators, 6-1, in their last game of the season. That means that the Red Wings clinch a playoff berth for the 25th consecutive season, and the Flyers need two points to get back into the playoffs.

Despite a lackluster record on the road, the Rangers finished the season with a 27-10-4 record at MSG, and secured a point in 19 of the last 25 home games. Unfortunately, they will not have home ice advantage in the playoffs, but that record is still encouraging heading into the postseason. They also finished with 101 points, marking the first time since the 1971-72 season and the 1972-73 season that they have earned 100 points in back-to-back seasons.

The Rangers decided to play a lot of their young players and backups, scratching Mats Zuccarello and Viktor Stalberg for injuries, as well as starting Antti Raanta and keeping Dan Girardi out of the lineup. Despite that, they played pretty well against a Detroit team that was playing for their playoff lives. Oscar Lindberg was back in the lineup, and Marek Hrivik was recalled from Hartford.

Following the game, AV did say that Stalberg, Zuccarello and Dan Girardi should be good to go for Game 1 on the playoffs, but Ryan McDonagh remains day to day. There’s still no official diagnosis released for the Rangers captain.

Unfortunately, there may have been another injury sustained by a Ranger. Eric Staal went down to the ice in the second period and was removed from the game. Off of the faceoff, it looked like Jesper Fast bumped into Staal’s head with his hip. According to Vigneault, he was removed because of precautionary reasons, but did say that, “he should be fine.”

This win also means that it’s very likely that the Rangers will take on the Pittsburgh Penguins in the first round, which I have mixed feelings about. Marc-Andre Fleury is probably not going to be available which means Matt Murray will be the starting goalie (UPDATE: Murray left today’s game after colliding with the Flyers’ Brayden Schenn). But he was the best goalie in the AHL last season and he has been fantastic in the NHL to date. So that doesn’t necessarily give the Rangers any advantage. Evgeni Malkin is still injured and could miss the entire first round. But the Penguins have been the best team in the league since Malkin went down, and guys like Carl Hagelin, Phil Kessel and Sidney Crosby have really stepped up and played well. They’ll be a tough out.

The Red Wings looked to open the game with a goal just over two minutes into the game, but a challenge from Alain Vigneault proved that the play was offsides, and the game went on. The Rangers played well in this period, and were rewarded with a late goal. Dan Boyle made a great play to intercept a pass and go on an odd man rush. When the pass was taken away, he rifled a shot under the arm of Jimmy Howard for his 10th goal of the season, giving him 24 points in 74 games.

The Rangers essentially rested their starters in this game, giving 15-18 minutes to the third and fourth line guys, while Nash and Stepan essentially coasted by with 10 minutes of ice time. Smart move by AV. So it’s not really necessary to break this game down in term of shots on goal and possession, since the Rangers weren’t really pushing.

The Red Wings did score once in this period, breaking through Antti Raanta on the power pay. Pavel Datsyuk fired a wrist shot that deflected off of Riley Sheahan, who was screening the goaltender. It deflected off of his hip and into the net, tying the game at one.

Detroit sent 16 shots on goal this period, and Antti Raanta made some spectacular saves to keep the game close. Raanta stopped 31 of the 33 shots he faced in this game, and he closed out his season on a high note, winning seven of his last eight starts with a save percentage around .930. He earned his 10th win of the season, and it’s encouraging to know that the Rangers have a reliable goalie on the bench should they need him in the playoffs.

After 14 minutes of a much more tightly contested third period, the Rangers scored the go-ahead goal, and it was Kevin Hayes picking up his 14th goal of the season. Marek Hrivik made an excellent play on the forecheck to free up the puck, and Oscar Lindberg sent the puck around the boards to Dylan McIlrath. He had his head up the entire time and sent an excellent shot towards the net, right in the vicinity of Hayes to deflect. He did just that and gave the Rangers the lead with 5:38 to go.

The Red Wings pulled the goalie with about 2:30 remaining in the game, and the Rangers immediately gained possession. Jesper Fast passed it off to Oscar Lindberg, who sent it into the empty net for his 13th goal of the season. Lindberg scored the first and last goals of the Rangers’ regular season.

In the end, it’s a feel-good win with most of the Rangers’ bottom six playing. Maybe they get a little momentum, Antti Raanta has all the confidence in the world, and guys like Oscar Lindberg, Marek Hrivik, Brady Skjei and Dylan McIlrath got some valuable playing time.

Speaking of Brady Skjei, he played another solid game today, logging over 22 minutes of ice time and finishing with a +2 rating. Let’s face it, he’s going to be in the lineup for Game 1 of the playoffs, and that’s not a bad thing. Sure, it’s bad that McDonagh is hurt, but Skjei is a damn good player. He’s a phenomenal skater, a good puck mover, a smart defenseman, and he’s strong. I’ve seen him tie up guys and defend the front of the net just as good as a 10 year veteran. He’s a great player and in my opinion, will fill in fine in the playoffs.

Same with Dylan McIlrath. Dan Girardi’s injury isn’t as serious as McDonagh, but McIlrath would be a serviceable player if needed in the playoffs. He skated for a team-high 22:57 and picked up an assist, and continues to improve in all areas of his game. When his time comes, he’ll be a solid NHL player.

The Rangers will have to wait and see what the Islanders do before finding out who they play in the playoffs. Expect round one to start on Wednesday or Thursday.