← BREAKING: Rangers sign Pavel Buchnevich to Entry Level Contract
The Rangers need another Russian forward with Buchnevich, and here are some options → 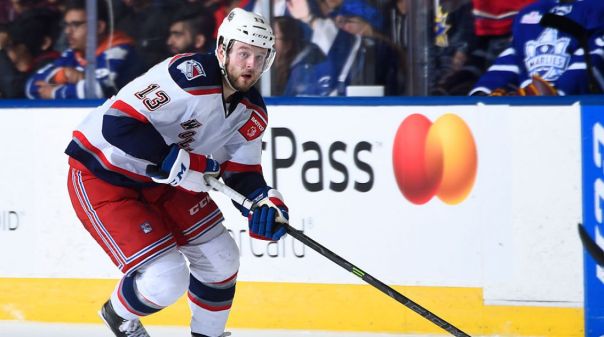 After trying out Emerson Etem in the lineup for a little while, Jeff Gorton made the decision to ship out the 23 year old and get something in return. Etem, 23, had been part of the trade with the Ducks when trading the rights of Carl Hagelin, a trade where Gorton was mainly concerned with moving up to select Ryan Gropp.

Many people complained about Etem’s usage and the lack of chances that he was given, but personally, I never saw anything from Etem. He really wasn’t that effective offensively, had trouble with the puck, and he wasn’t good in puck battles against the boards, which he pointed out as one of his strengths. So trading him for some kind of prospect was a smart move.

Jeff Gorton sent Etem to Vancouver, reuniting him with his junior hockey coach, and getting 23 year old Danish prospect Nicklas Jensen in return. Jensen didn’t turn any heads or create headlines, as he seemed to be just a middle of the pack AHL prospect.

But ever since joining the Rangers organization, the move has lit a fire underneath Jensen, and he’s been producing and scoring a lot. In 27 games with Utica before the trade, he scored 12 points (4-8-12), but he wound up scoring 15 goals and 25 points in 41 games with the Wolf Pack.

He’s carried over that success and momentum into the IIHF Tournament as well. Playing for his native Denmark, Jensen has been one of the team’s best players, scoring four goals and six points in just six games.

Big night for Nicklas Jensen who score twice for @DKIshockey including this one. RT to celebrate the win #IIHFWorlds pic.twitter.com/RkOR3p1cRw

Watch as Nicklas Jensen get the shootout winner for @DKIshockey. Big win over the Czechs. #IIHFWorlds pic.twitter.com/OUJcKeJKBY

A fleet-footed and sizey scoring winger. Owns good puckhandling skills and a hard, accurate shot that absolutely jumps off his stick. Is alright defensively, and does show a decent amount of physicality; however, both of these areas may need improvement. All-in-all, an offensive winger that can be very dangerous on the forecheck.

At the rate he’s going, Jensen has a really good shot at making the roster next season, either as a spare forward or maybe in the bottom six depending on how the offseason shakes up. If Vigneault smartens up and takes Tanner Glass out of the lineup, a fourth line of Jensen, Oscar Lindberg and Jesper Fast could have an excellent balance of scoring, defensive ability, and prowess forechecking.

If the Rangers play their cards right, their lineup could look like this next season;

Personally, I like the look of this lineup a lot. Scoring on all four lines, talent evenly dispersed, and a fourth line that can actually be effective in all three zones.

The Rangers are going to need cheap options to fill out their roster, especially considering the fact that the team is pressed up against the cap and they have a lot of key RFAs to lock down. Jensen could be a really good fit for the team next season.

← BREAKING: Rangers sign Pavel Buchnevich to Entry Level Contract
The Rangers need another Russian forward with Buchnevich, and here are some options →