Cam Talbot will be the starting goalie for the Rangers, coming off of his fourth win of the season. Talbot is 4-1-0 with a 1.13 GAA in his last six appearances. Photo courtesy of Getty Images.

The Rangers (24-12-4) will begin another tough road trip tonight, when they face off against the Boston Bruins, who have won their last four games. Following tonight’s game, the Rangers will head to Columbus for a clash with the Blue Jackets, and then head off to Pittsburgh for a matchup against the Penguins.

The Rangers and Bruins are both tied with 52 points, but New York has four games in hand, with both teams holding on to one of the wild card spots.

Although the game against the Bruins is the start of yet another challenging road trip, the Rangers have been playing very well away from Madison Square Garden lately, sweeping all three games of the California road trip, giving them a four game road win streak.

A loss at home against the Islanders ended the Rangers five game win streak, but the Blueshirts still have won 13 of their last 15 games dating back to December 8th.

The resurgent Bruins are playing better in part to the return of some key players, that being Milan Lucic and the Captain Zdeno Chara.

Boston has also been getting contribution from the rookie David Pastrnak, who has four goals and an assist in eight games this season. All four of those goals have come in the last two games, with two a piece against the Flyers and the Lightning.

Because of this, Pastrnak will be extremely motivated to impress the Bruins, and have them keep him in the NHL. Already full of confidence with two straight two goal games, expect him to be all over the ice, and a threat with the puck.

Tuukka Rask is expected to start in net against the Rangers, coming into the game with an 18-10-6 record, a 2.49 goals allowed average, and a .913 save percentage.

The Rangers will counter with backup goaltender Cam Talbot, who has been very good lately. Talbot has a 4-1-0 record in his last six appearances to go with a 1.13 GAA, a .961 save percentage, and three shutouts in that span.

However, New York will be without center Derek Stepan, who received a vicious slash in the game against the Islanders. Stepan has been a huge part of the team’s success since his return, posting 27 points (6-21-27) in 28 games this season. Stepan is a big part of the power play and will certainly be missed in the lineup.

Derek Stepan will most likely not play tonight, due to what the Rangers are calling an “upper-body injury.” JT Miller will center the second line and Tanner Glass will play on the fourth line. Photo courtesy of MSG Photos.

JT Miller will slide into the center role to replace Stepan, and will be skating with Chris Kreider and Martin St. Louis on the second line. Miller has played very well with St. Louis in the past, so this line has high potential. Tanner Glass would come back into the lineup to play left wing on the fourth line.

After struggling early in the season, Chris Kreider has been much better lately. Kreider has three goals and two assists in his last six games, and has been more noticeable on the ice. The Rangers really benefit when Kreider can consistently use his blazing speed and size. Kreider is fourth on the team with 20 points (8-12-20) and is tied for second with four power play goals.

A healthy defense is one of the reasons for the Rangers success, with Kevin Klein and Dan Boyle providing most of the offense from the blue line.

Klein had a career high four game point streak earlier this season, and is tied for third in the NHL in even strength goals with eight. He’s also the only defenseman in the league to score at least eight goals, three game winning goals, and have a plus/minus rating of +15 or higher. 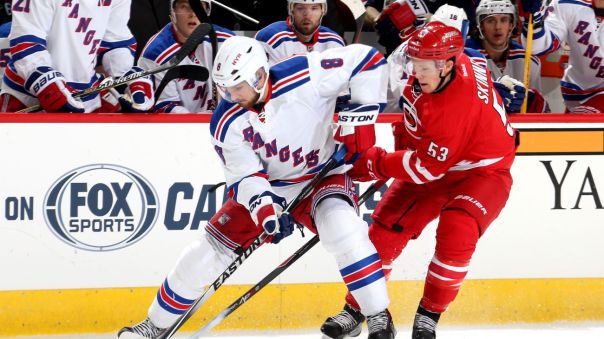 Kevin Klein has been one of the Rangers most consistent players, and is having a career year offensively. Klein leads the Rangers d-men with eight goals, and has three game winning goals. Photo courtesy of Getty images.

Dan Boyle has been very good since returning to the Rangers lineup on November 13th. Boyle has at least on point in five of his last nine games, with seven points (2-5-7) in that span. Boyle is an excellent puck mover, and a power play specialist.

The Rangers and the Bruins will face off at 7 PM in Boston tonight. The game will be broadcasted on MSG Network.