Rangers shut out by Bruins for second consecutive game; Talbot with 29 saves

The Rangers dropped their second consecutive game, getting shut out by the Bruins. The Rangers haven’t scored a goal in 121:00. Photo courtesy of Getty Images.

For the second consecutive game, the Rangers (24-13-4) could not find the back of the net, falling to the red-hot Boston Bruins (24-15-6) on the road, doomed by their own errors and some great goaltending from Tuukka Rask of the Bruins.

Rask, the 2014 Vezina winner, was outstanding for the Bruins, making 30 saves, picking up his second shutout of the season, and his 19th win.

Cam Talbot had a strong game in net, stopping 29 of the 32 shots that he faced. Talbot had practically no chance on two of the goals due to defensive breakdowns and wide open Bruins players. Talbot fell to 4-4-1 with the loss.

The Rangers had some of the same issues that they had when they were shutout by the Islanders. The Bruins did not allow the Rangers to consistently pressure Rask or generate offense. They had trouble forechecking, skating through the neutral zone, and getting quality chances at even strength, ultimately extending the team’s scoreless drought to 121:00.

However, it was a much better effort from the Rangers. The team did not look flat, but had a lot of trouble finishing, missing on four breakaway chances throughout the game. The possession was lacking, and that set the tone for the Rangers offense.

The Bruins opened up the scoring just four minutes into the game. Patrice Bergeron won back the faceoff cleanly, and was able to tap in the rebound off of Dougie Hamilton’s shot from the point. It was Bergeron’s 11th of the season.

The Rangers had some quality chances in the period, starting out with a Chris Kreider breakaway, with Rask making a nice left pad save. On a Rangers power play, Lee Stempniak was also stopped on the breakaway. Later in the period, Carl Hagelin hit the post on another chance following some great passing. However, the Rangers could not score in the period, and headed into the locker room down a goal.

Lee Stempniak had a breakaway chance in the second period, but was stopped by Rask, one of his 30 saves on the night, and one of the many missed chances for the Rangers. Photo courtesy of Getty Images.

The Bruins broke through quickly again in the second period again, with David Krejci scoring his sixth goal of the season. Torey Krug sent a great pass over to an uncovered Krejci for an easy tap in, putting up the Bruins by two goals.

Rick Nash had a breakaway chance in the period following a great defensive play, but waited too long to make a decision, and shot the puck wide of the net.

Martin St. Louis also had a few chances, deflecting one puck wide and missing on an easy tip-in after the puck rolled off his stick.

The Bruins would score one more goal in the third period, with Loui Ericksson scoring his 10th goal of the season. Eriksson got a rebound in front and was uncovered. Eriksson took his time and placed a great shot top shelf to beat Talbot, giving Boston their third goal of the night, and ultimately their fifth consecutive victory.

For the Rangers, the problem was their defense. The last two goals for the Bruins came on blown defensive coverages. Despite not being able to score goals, the Rangers need to play much better defense in order to give the Rangers a chance.

In his first game back, Tanner Glass was extremely active, and actually had a good game. Glass had two shots on goal, one blocked shot, and eight hits in 11:22 of ice time. Glass also got into a fight Adam McQuaid in an attempt to energize the team. Glass played a very strong game, and was one of the few positives. 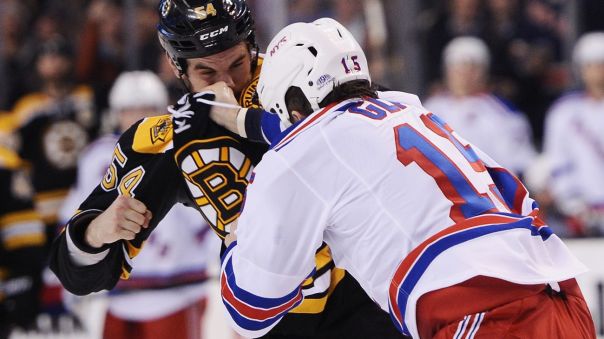 Tanner Glass had a strong game in his return, and did everything he could to energize the Rangers with his eight hits. Photo courtesy of Getty Images.

In the second period while the Rangers were on the power play, Brad Marchand went into the corner with Brassard and slew footed him, taking out Brassard’s feet and causing him to land on his back. Not call was made, and Brassard said after the game that plays like that are serious and can easily cause injury, and are something that “we don’t want in the game.” It also would have given the Rangers a five-on-three power play, which could have been a turning point. Hopefully the league takes action, because it was an extremely dirty play that could have caused serious injury.

The Rangers will need to play much better tomorrow night when they face off against Rick Nash’s former team, the Columbus Blue Jackets, who will also be searching for a win after losing their last three games.