← Rangers take down the Islanders with a thrilling comeback in a Game for the Ages
Stop worrying about faceoffs, the Rangers should address other areas instead →

Mackenzie Skapski should start in Buffalo 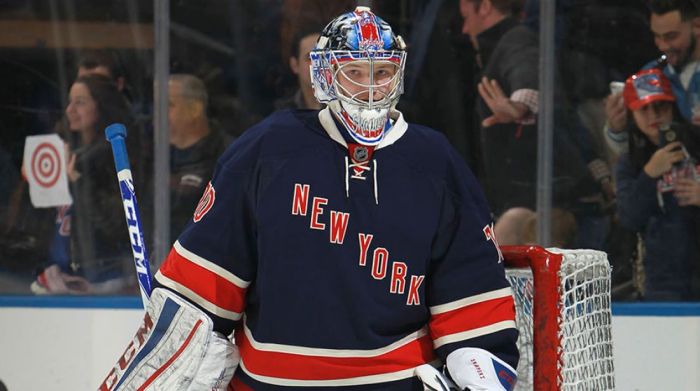 Mackenzie Skapski, the 20 year old who has been backing up Cam Talbot and working on his game with Benoit Allaire, should get a chance to start against the Buffalo Sabres on Friday. Photo courtesy of the New York Rangers.

On November 21st, the Rangers were scheduled to play a game on the road against the Buffalo Sabres at the First Niagara Center. However, plans were changed when over 60 inches of snow covered the city of Buffalo, forcing the NHL to postpone the game for the safety of the players and the fans.

That game has been rescheduled for this Friday, breaking up what would have been a four game homestand. It also creates a back-to-back scenario, with the Rangers playing the Vancouver Canucks on Thursday night before heading upstate for the game against the Sabres on Friday.

Cam Talbot is very likely to start on Thursday against the Canucks, which would be his eighth consecutive start. Before this, his career high had been three straight starts.

With Henrik Lundqvist out for the forseeable future after being diagnosed with a sprained blood vessel, the Rangers are going to have to rely heavily on Cam Talbot. Talbot has done a pretty good job, posting a 5-1-1 record as a starter, having been helped out by the Rangers offensive explosion. Talbot started last night against the Islanders, having a “Jekyll and Hyde” game; making some mental mistakes throughout, but coming up big in other moments. He finished with 38 saves on 43 shots faced.

When Henrik Lundqvist held a press conference, he mentioned that he will be “reevaluated” in a range of at least three weeks, not cleared for play. After that time, we will likely find out when he will be ready to play. Henrik also mentioned that he was looking forward to getting back for the final push before the playoffs, meaning that he will be out for a bit, with a chance of the injury sidelining until mid-March or later.

If that is the case, Talbot is clearly the go to guy in New York for the time being, and will get a lot of work in net. If Lundqvist is out until mid-March, let’s say the 16th, which represents another 13 games for the Rangers, with two sets of back-to-backs in that span.

Talbot has faced a total of 78 shots in the past two games, both exhausting efforts in wins over the Coyotes and the Islanders. He will likely face a steady amount of shots against Vancouver, which can be a team with an explosive offense at times. 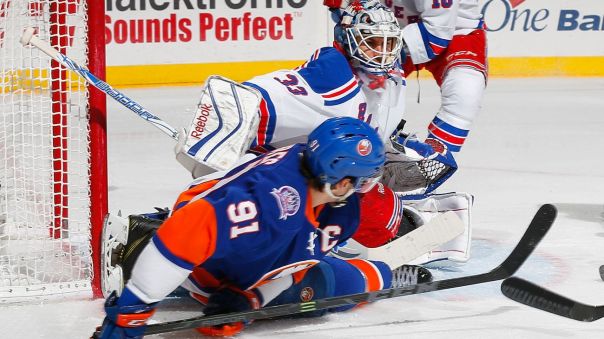 Talbot had a heavy workload against the Islanders on Monday, facing 43 shots in the win. Photo courtesy of Getty Images.

Considering the fact that Talbot will have started eight straight games after Thurdsay night, and will likely have to do that at least one more time before Lundqvist is ready to play, he is going to need some rest at some point, just like every other starting goalie in the NHL. And it should be Mackenzie Skapski starting in net in Buffalo.

This is not because of how Talbot has played. He played really well against the Coyotes, and did exactly what was asked of him; give the Rangers a chance to win.

In fact, unlike most people, I think Talbot is the answer for the Rangers right now, and that Sather does not need to ship out draft picks or talent for a rental goalie. Talbot has done just fine in net, and will get better with the more starts that he makes.

Mackenzie Skapski, the 20 year old currently backing up Talbot, has never made a start in the NHL. However, there must be a reason that he was called up over Yann Danis, who has played in 53 NHL games with decent stats. There is something they saw in Skapski, and the only way to see what he can do is to give him a shot. 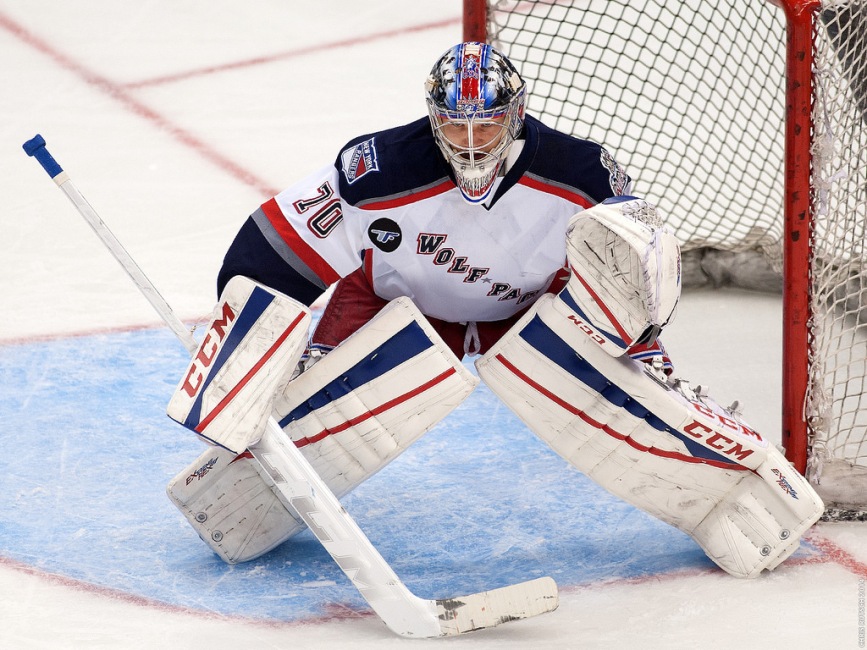 Mackenzie Skapski was called up to Hartford due to injuries, and did a nice job filling in as a replacement, earning himself a spot on the Rangers team. Photo courtesy of the Hartford Wolf Pack.

He received praise from coaches in Hartford, and has been working closely with the Rangers goalie coach Benoit Allaire a lot since his call up.

The bottom line is Cam Talbot will need rest if the Rangers are going to use him heavily until Lundqvist’s return, which could be far away. And who better to start Skapski against than the Buffalo Sabres, who have won just two of their last 20 games, although they are playing the Devils tonight.

It would be a low pressure situation for Skapski, and Cam would get a much deserved night off. Also, it’s time to see what he can do, so the Rangers can evaluate their plans for him in the future.

Give Skapski his moment in the spotlight, give Talbot a night off, and let’s see what this kid can do.

← Rangers take down the Islanders with a thrilling comeback in a Game for the Ages
Stop worrying about faceoffs, the Rangers should address other areas instead →