← Rangers blanked at home by the Blackhawks; Talbot sharp in net again
Rangers Practice Report; Kevin Hayes back to center →

Hockey players are humans too

Hockey players are not just athletes, they’re normal people, and unfortunately fans did not acknowledge that when they turned their back to Tanner Glass. Photo courtesy of MSG Photos.

For those of you who don’t know, after a lot of the Rangers home games at Madison Square Garden, players will walk out of the front entrance to take pictures with fans and sign autographs. That’s how I met Mats Zuccarello and Mackenzie Skapski, and it can be a great way to interact with the Rangers players.

With that being said, there was a story that came out following Wednesday night’s loss to the Chicago Blackhawks. After the game, a few of the players decided to come out to interact with the waiting fans, and Tanner Glass was one of them.

Now it seems that Glass has become the Rangers fans’ whipping post, as he gets blamed for most of the goals against and losses, whether or not it is his fault. People expect him to score like Alex Ovechkin, when that is clearly not the type of player that he is, or ever has been.

I’ll be the first to admit that Tanner Glass is not having the season that either he had hoped for, or the Rangers had hoped for. Glass can clearly be a productive, aggressive, fourth line grinder, as evident by his five goal, 11 assist season in 2011-12 with the Jets, and his four goal, nine assist season last year with the Penguins. It just hasn’t happened for him this season unfortunately.

When Glass came out to meet with the fans, some people who were their said the majority of the fans waiting ignored him, turning their back to him rather than saying hello, getting an autograph, or getting their picture taken with them.

Honestly, I’m pretty disgusted how these fans acted towards Tanner Glass. No matter what your opinion of him as a hockey player is, Glass is still a person who has feelings. He could just have easily taken the back entrance out and avoided the fans, but he decided to take time and meet the fans. Yet the fans of the team decided to turn their back on one of their team’s players, effectively turning their back on the team.

The old saying that you root for the team on the front, not the name on the back, stands true here. Just because you may not be a fan of Glass, doesn’t mean you should root for him to fail or completely ignore him when he comes to say hi. Why root for someone to fail if he is going to be in the lineup often? You should be hoping that he does well and produces for the team more.

Just because an athlete gets paid a lot of money, doesn’t mean that they’re not allowed to go through rough patches or have their own struggles. They’re human, and they have rough times like everyone else. This is one of those times for Glass, and the last thing he needs is the Ranger fans turning their back on him.

How would you feel if you were going through a rough stretch, and all your so-called supporters turned their back to you, and not supporting you during your struggles? Did you ever stop to think that maybe some support from the fans could give him a little boost, translating to his play?

People don’t think about it, but hockey players have to face a lot of adversity throughout the season. They’re constantly traveling, devoting a lot of time to the game, and not having a ton of time to spend with family and friends. When guys go through slumps, it really nags at them, especially because they devote their life to the sport. And then he has the so-called fans turning their back to him, which can’t make him feel good about himself.

It’s not like Glass isn’t trying or playing hard. One thing you can’t deny is his effort, as he is always playing an extremely physical game, getting the puck deep and finishing his checks. He can kill penalties, and is the first guy to stand up for his teammates.

Tanner Glass is always the first guy out to defend his teammates, playing very physically, and he’s never afraid to drop the gloves. Photo courtesy of Getty Images.

Obviously he wants to score and produce more. The effort is there, and he just hasn’t caught a break unfortunately. His confidence can’t be too high, and this occurrence doesn’t help it either.

When I met Mackenzie Skapski, it was shortly after he was called up, and before he made his first start. After the game, I waited to meet players. Skapski came down with Mats Zuccarello, and I actually called out Skapski’s name and waved to him first. He waved back, and actually walked through everyone else to come say hi to me first and sign my puck. He was smiling and looked really happy, probably siked that someone knew who he was before he made any starts. Skapski was really friendly, and it was an awesome experience. And Zuccarello was still around to sign my puck afterwards. 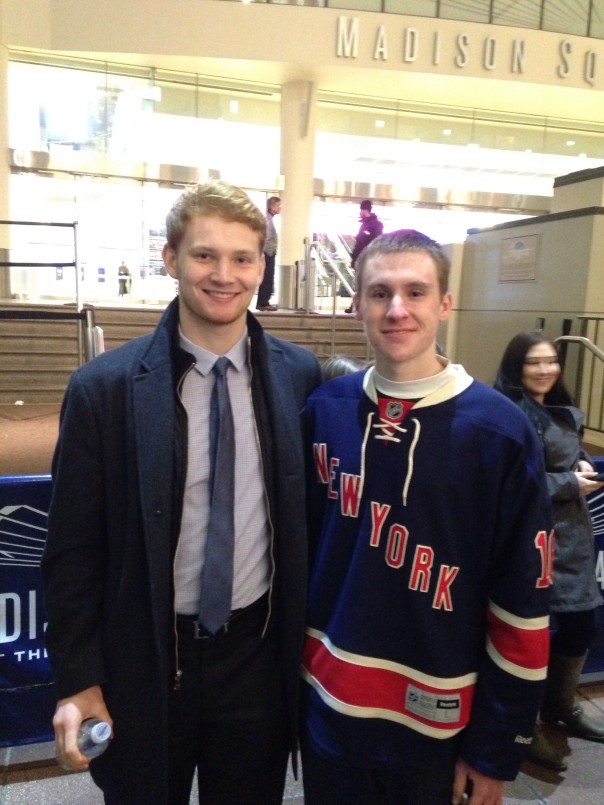 Meeting the then-unknown Mackenzie Skapski was a great experience, and one of my favorite experiences with a Ranger. He seemed happy that someone took the time to come over, say hi, and talk.

Tanner Glass is a very nice person, and probably came out to meet fans because he enjoys interacting with all of them. It could have been a really great experience meeting and talking to a player, wishing him luck, and then going back to meet the other players. There is absolutely no reason to completely ignore him. It’s rude, it’s tasteless, and it goes against supporting your team.

And besides all of that, Tanner Glass, and all other athletes, are human beings. They have feelings too, and they’re allowed to go through rough stretches like the rest of us. If you were one of those ignoring him, think about how you would feel if that was reciprocated, or if you were in his shoes.

You root for the Rangers, which means you support the players. If you’re rooting for Glass to fail, you’re rooting against the team. Nobody deserves to be treated like that, regardless of the fact that he’s a pro athlete.

On the slim chance that Tanner Glass decides to take a glance at this article, I’m sorry for how some fans acted, and it really was rude an inappropriate. You still have plenty of Rangers fans backing you and hoping for some more success on your end. Keep up the hard work, and I can’t wait to see you net that first goal. I’ll be at the game on March 29th, and I hope to meet you and say hello either before or after the game.

← Rangers blanked at home by the Blackhawks; Talbot sharp in net again
Rangers Practice Report; Kevin Hayes back to center →