← Rangers look to continue home ice success against the Canucks
Vigneault finally used Yandle properly, and the Rangers were a better team because of it → 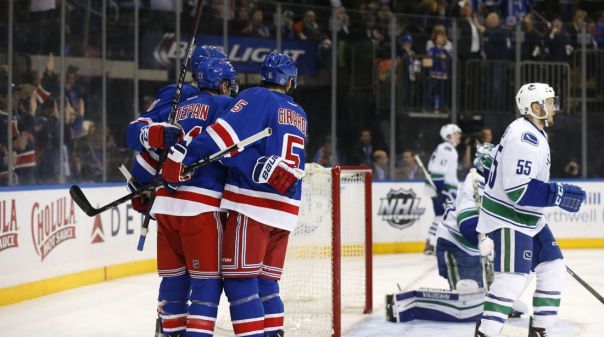 What started out as a very frustrating night turned into elation for the Rangers (25-16-5) when JT Miller gave the Rangers a 3-2 overtime victory over the Vancouver Canucks (19-17-11).

It was truly amazing that the Rangers didn’t score a lot more goals. They finished with 49 shots on goal, hit the goal post or crossbar six times, and faced Ryan Miller, who brought his A-game. But despite the frustrating sequence of events for the first 50 minutes or so, the Rangers battled back and earned the two points.

This was easily the team’s best offensive performance of the season, and you could argue that it was one of their better defensive performances too. The Rangers had 49 shots on goal, even more scoring chances that were blocked or went wide, and they only allowed 20 shots on goal for Lundqvist. They truly deserved the win and got it.

At even strength, the Rangers out-attempted the Canucks 70-35 and every Ranger skater finished with a positive corsi. They limited the Canucks to 38 shot attempts in the game, including a stretch of 10:04 where Vancouver didn’t even attempt a shot in the third period. Needless to say, the possession numbers were fantastic.

Reviewing the defenseman, Alain Vigneault finally, finally used Keith Yandle like he should. First of all, the duo of Yandle and Klein played pretty well for most of the night, apart from Klein’s gaffe on Alex Burrow’s goal. But Yandle played for 23:33 tonight, with only one minute coming on the power play. It’s no coincidence that the offense posted a season high for shots on goal and completely dominated the Canucks in their own zone. When used properly, and given sufficient ice time, he thrives and contributes tremendously to the team.

Ryan McDonagh also had a fantastic game. He’s showing flashes of his old self from the 2013-14 season. He’s skating tremendously well, has an assist in the last three games and he’s playing well defensively again. The Rangers need this McDonagh every night.

The first period was very fast paced, full of action and scoring chances for both teams. The Rangers got off to the better start, getting six shots on goal in the first seven minutes and outshooting the Canucks 17-11, as well as hitting the post twice.

Just 22 seconds into the game, Keith Yandle came close to scoring his third goal of the season. Kevin Klein made an excellent backhand feed to Yandle, and he fired a slap shot just off of the post. Rick Nash then followed that chance up with a wrist shot of his own off the rush, but Ryan Miller was able to stop the initial shot, as well as keep it out of the net after it deflected off of his own player.

What a stop by Ryan Miller pic.twitter.com/uAnF7NtNI0

Henrik Lundqvist was tested a bit as well, especially when the Canucks had a long shift back in their own zone, with his save coming on Ben Hutton’s wrist shot from in tight. Lundqvist was able to get his shoulder on the shot and deflect it over the net.

But the period belonged to Miller as he continued to make some excellent saves and keeping the Rangers off of the board for the entire period. He’d make a great stop on JT Miller from just feet away, as well as back to back saves on Lindberg and Viktor Stalberg on the deflection. Ryan Miller finished with 17 saves in the period. Ryan McDonagh would hit the crossbar with a shot as well.

The Canucks would score on one of their 11 shots, and it was the youngster Sven Baertschi scoring his eighth goal of the season. Bo Horvat started the play, beating Dany Boyle around the outside and outmuscling him behind the net. He made an excellent pass from behind the net to Baertschi, who tapped it in past an unsuspecting Lundqvist for the first goal of the game.

Baertschi puts the Canucks up 1-0 pic.twitter.com/CF70BiN1L8

It really was an excellent period from the Rangers outside of the fact that they couldn’t score a goal. They had a ton of chances from high danger areas, outshot the Canucks and didn’t give them a lot of room to work with.

The Rangers opened the second period with the same frenetic pace as the first period, getting a lot of shot attempts and scoring chances and not allowing the Canucks to do much of anything early on.

Ryan Miller picked up where he left off, denying Derek Stepan on a rebound chance. Kevin Klein shot the puck wide of the net, and the only reason Stepan didn’t tap the puck into the short side was because of Miller’s outstretched stick.

But Stepan wouldn’t be stopped, scoring the Rangers first goal a few minutes later during a delayed penalty. After Kreider drew a penalty, the Rangers got an extra skater on the ice. The puck movement was perfect, finding the open man for a shot, and Stepan tucked in the loose puck for his goal of the season.

Stepan ties the game at 1 pic.twitter.com/Ocoeym8aJH

Kreider and Nash picked up the assists, and the helper extended Kreider’s point streak to four games.

Less than a minute after the goal, the Ranger had another close call. Nash waited for a screen on Miller, and sent a laser of a wrist shot that deflected off of the post. Then a few minutes later, Ryan McDonagh hit the post again trying to tap in a loose puck that Miller couldn’t handle.

Despite a pretty solid night defensively, the Rangers had another mental lapse that led to Vancouver scoring, as well as Lundqvist breaking his stick. Emerson Etem won the puck battle near the boards when Jayson Megna came over to try and help Yandle defensively. But Etem wrestled the puck away and was uncovered due to Megna moving. Klein went to cover Etem, leaving Alex Burrows wide open in front of the net for an easy tap in, and giving Vancouver their one goal lead back.

This needs to be fixed by the coaching staff. Constantly, the defense forgets where everyone is on the ice and leaves a man uncovered in front of the net. It’s become way to frequent and it’s a huge problem.

Amazingly, the Rangers hit the post yet again. Ryan McDonagh made some excellent moves and used his skating to get an open slap shot, but his shot clanged off of the post, the third time that happened for him and the fifth time for the Rangers.

New York had controlled play for most of the first 40 minutes, they outshot the Canucks 30-17 through two periods, but Ryan Miller and the goal posts did their job to keep Vancouver ahead, 2-1.

Again, the Rangers started off the final period with some really great scoring chances. JT Miller got the puck from Kreider off of a broken play and made an excellent move to transition the puck to his backhand, but he couldn’t elevate it over Ryan Miller’s pad and glove hand. Then Jesper Fast had an excellent shorthanded chance, deking past his defender, getting Miller to go down to the ice early, but seeing the puck roll off of the end of his stick and his backhand shot go wide.

Miller did it again shortly after that, robbing Viktor Stalberg of a goal. Off of Kevin Klein’s shot, Stalberg gathered the loose puck, pulled it back and around Miller in an attempt to tuck it in behind him. But somehow, Miller got done his glove hand and stopped Stalberg from finding the back of the net.

Stalberg can’t get it past Miller pic.twitter.com/RQQRDknc05

The Rangers were totally dominating, getting tons of shots on goal and shot attempts. They hit the 40 shot mark halfway through the period, not allowing the Canucks to get a shot on goal for over 11 minutes. Vancouver was back on their heels.

Just about 12 minutes into the period, the Rangers finally, finally broke through, and it was Mats Zuccarello breaking his goalless drought of seven games.

Nash carried the puck behind the net, bringing a Canuck defender with him. Ryan Miller lost his stick on that play when it got hooked around his player’s leg. Nash passed it off to Yandle, who was in deep on the play, and he sent a fantastic pass across the crease to Zuccarello, who tapped it in between Miller’s leg and tied the game at two.

Zuccarello ties the game at 2 off a beautiful feed from Yandle pic.twitter.com/QCx7azX9ol

The Rangers remained unlucky, hitting the post for the sixth time in the game just minutes after Zuccarello had scored. Dominic Moore sent a shot that went under the sticks of two defenders, through the legs of Miller and off of the left post.

Neither team was able to score again, and the game headed to overtime with the Rangers leading in shots, 46-19 after allowing just two third period shots from Vancouver.

In overtime, the Canucks had the first prime scoring chance. Keith Yandle was pressured and forced into a turnover, leading to a breakaway for Bo Horvat. Zuccarello made a game-saving play in overtime, hustling to poke the puck away from Horvat’s stick and allowing Lundqvist to kick away the puck with his pad.

With just over a minute to play, the Rangers top line had an extended shift in the offensive zone. JT Miller shot the puck up high on Ryan Miller, and he tried to hold the puck in his pads. But it popped loose and JT was quick to react, gathering the loose puck and scoring on a wrap-around try for his 10th goal of the season, and the game winner for the Rangers.

This team has life still, they’re in second place in the Metropolitan and third in the Eastern Conference. Mats Zuccarello said it best. “We’ve got to show them that Zed is not dead, you know?” (Comment on Larry Brook’s asinine article)

The Rangers have two days off before they head down to Carolina for a game against the Hurricanes on Friday.

← Rangers look to continue home ice success against the Canucks
Vigneault finally used Yandle properly, and the Rangers were a better team because of it →